Home > Articles > Oompa and Orthodox: Religion from the Greeks
0
Search
Share the article:

In a memorable line from the 2002 popular movie My Big Fat Greek wedding, the main character’s father offers his best piece of advice in dealing with any kind of crisis, even if it’s a blemish on the face. “Put some windex on it!” He declares, with a simple yet firm and well assured nod. This becomes a running joke throughout a movie that pokes fun at the greek orthodox culture in the United States, as Toula the main character who comes from a traditional greek orthodox family, falls in love with Ian Miller a non-greek, and begins to accept her heritage and cultural identity while she plans a traditional greek wedding with her non-greek fiance.

Hilarity ensues as the movie focuses on some of the quirks of modern greek culture in the U.S. But the movie exaggerates aspects of Greek Orthodox when it comes to the actual religion, as many american Hollywood movies tend to do.

However, Greek orthodox is much more similar to some other major world religions than most people might think. It focuses on several of the same basic pillars of Catholicism and Christianity including focus on both the New and Old Testaments of the Bible, and sacraments including baptism, confessions, and communion. However, Greek Orthodox is unique in that it’s calendar year, beginning in September and ending in August, celebrates twelve major feast holidays. Some of these holidays are also celebrated in Christian religion, such as Easter and Christmas, but some feasts have a special sense of greek vulture tied to them.

The Nativity of Theotokos for example, celebrates birthday of Mary, who is thought to be the mother of Jesus, and is celebrated on September 8. Theotokos is the greek title for Mother Mary, with theos meaning God, and tiktein meaning to give birth. There are two major hymns of the feast, including the Apolytikion and the Kontakion which are comprised of chanting on the fourth tone.

The interior of a Greek Orthodox Church, Getty

Greek Orthodox weddings, however, are what most people think of when they hear about the religion. These ceremonies are especially known for their use of wedding candles and the symbolic act of crowning the couple. The couple lights the candles during their vows as a reminder of God’s light in the world and in their new marriage, and signifies a union between families, and crowning the couple consists of a crown passing between the couple, the priest, and their sponsor called a Koumbara, and is meant to create the couple as King and Queen of their home where they will rule with justice, wisdom and integrity. In this ritual the couple promises to love and honor each other for all the days of their lives. 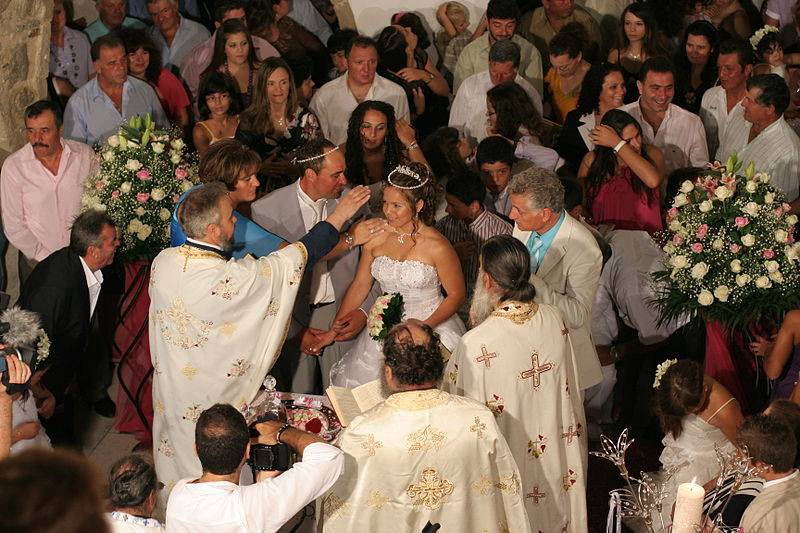 Like many other religions around the world, there are countless smaller rituals and aspects to the practice of Greek Orthodox than an article could cover. But with an overarching knowledge of Greek Orthodox, along with some of the other religions and practices I have written about, you might find yourself becoming a more globally minded person when it comes to spirituality in the world!