On a sunny day at the local park in the United States, it’s likely that you’ll see a few children laughing and running around a playground

But if you’re lucky, you might see someone practicing an ancient art called Tai Chi.

Tai Chi is an ancient form of chinese martial arts, where the practice involves slow and gentle body movements in coordination with the breath. Originally, it was practiced as form of defense but was later refined into a form of exercise.

A taoist monk named Chang San-Feng, was the first to create an original set of movements that mimic the movement of animals, and these movements were also then combined with traditional meditation techniques similar to those found in Buddhism and Yoga practices. 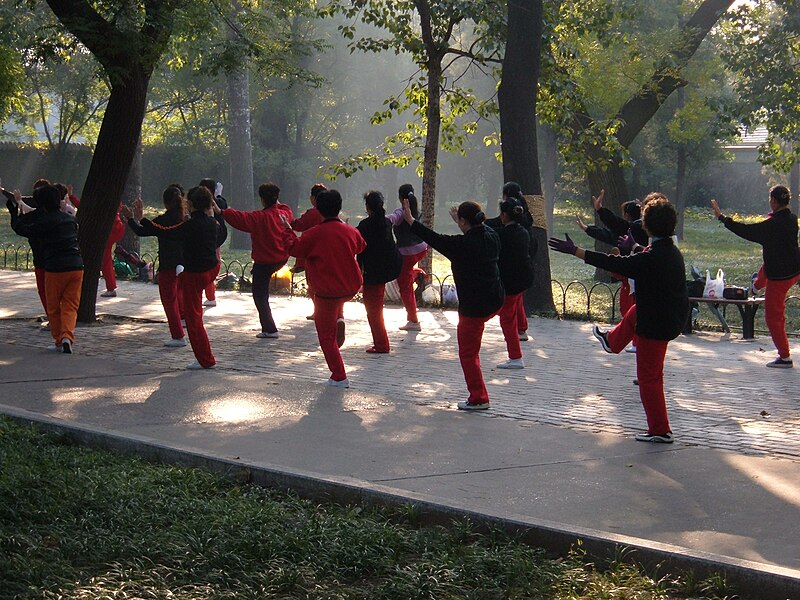 A group practice in a park, Photo Credit: WikiCommons

Tai chi is not only a beautiful practice on the outside, but also a powerful tool for health on the inside. The National Center for Complementary and Integrative Health reports that some of the health benefits of the practice include improved bone health, cardiopulmonary fitness, and balance. Of course, the practice also encourages better mental and emotional well-being as well.

Tai chi is a practice that almost anyone can participate in, as it is low impact and great for people with all levels of experience with exercise. Thousands of videos like the one below, can be found on Youtube or purchased on DVD, which guide beginners and experts alike through the movements.

The second video shows a group of practices in San Francisco, United States in a performance during Asian Heritage week.

https://www.youtube.com/watch?v=MJzNk2yj9Ic
Slowing down to such simple movements may be the best way to de-stress next time you are feeling overwhelmed, so give it a try!